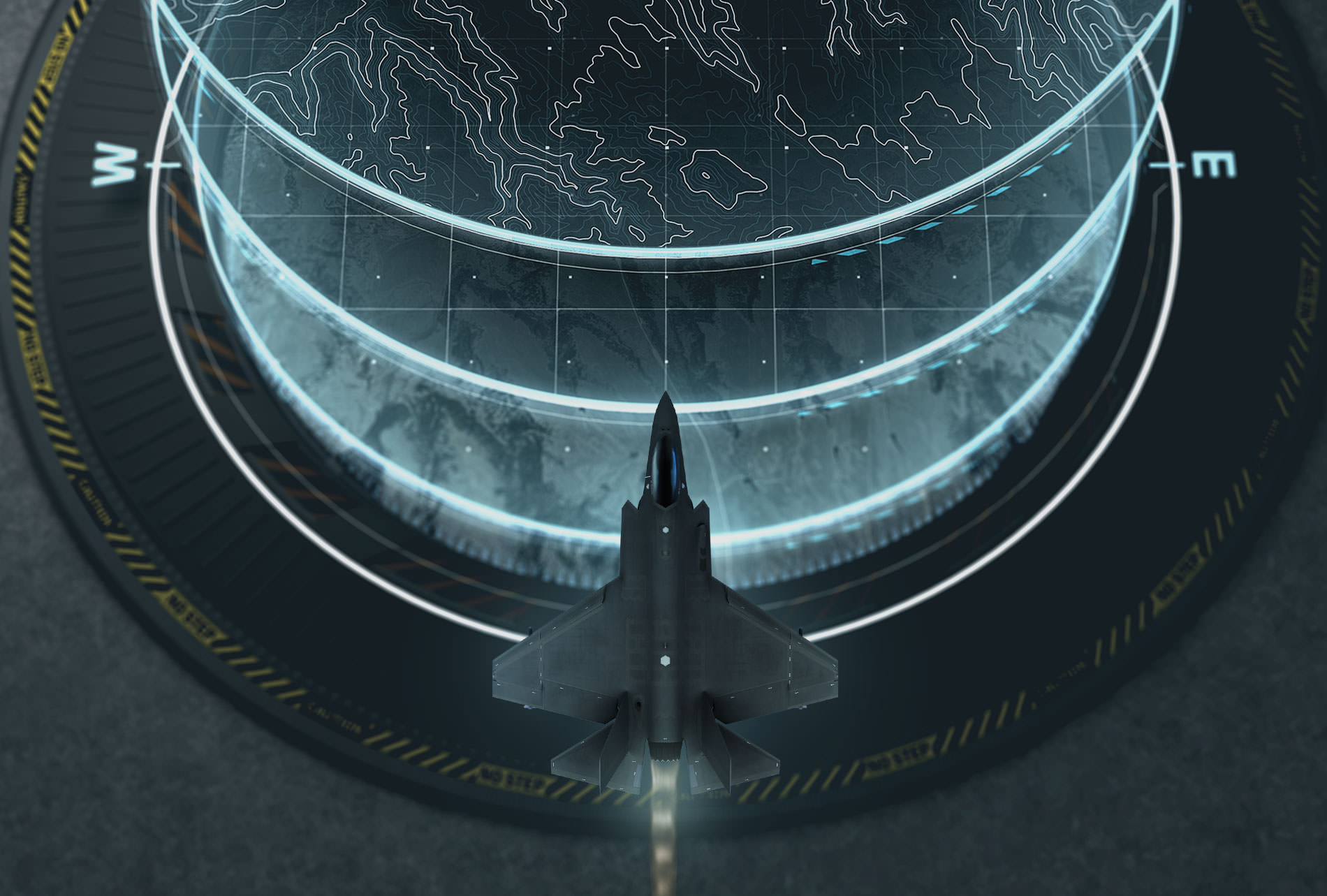 So many of us have dreams of flight. Perhaps that’s why, when we look to the skies, we find such enigmatic beauty in the iconic silhouettes that pass overhead. The United States Air Force is often admired for its mastery of the skies and the cutting-edge technologies it brings to bear in its missions. It may even inspire citizens to follow career paths into the armed forces. In order to aid in the recruitment of aviation enthusiasts, the USAF turns to educational outreach, and how better to demonstrate its technological capabilities than by breaking the boundaries of available consumer technology?

The USAF tapped GSD&M—who ultimately enlisted Royale—to design a new form of educational outreach that pushes the envelope of interactive technology. The USAF has pioneered Augmented Reality in its aircraft HUDs for decades. Now that AR is ubiquitous in our phones and tablets, the obvious next step was to leverage the devices in our hands. The USAF wanted to use consumer AR technology to make a game that was both engaging and educational, in order to create an adaptable virtual aviation asset for today’s world and for a post-pandemic future — one that has the tools to spark a passion for flight. Welcome to “Command The Stack”, an AR tactical flight game for iOS and Android. 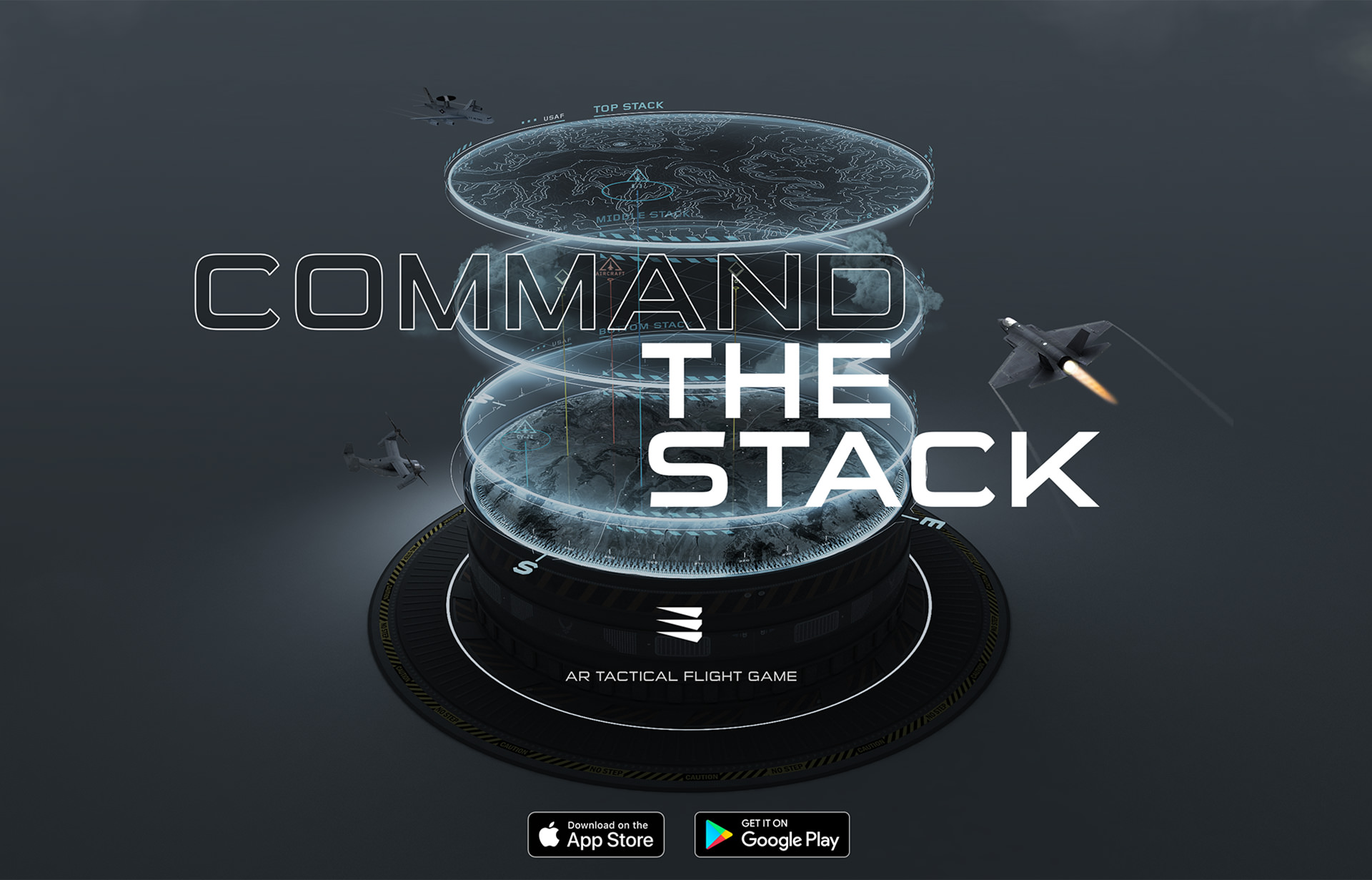 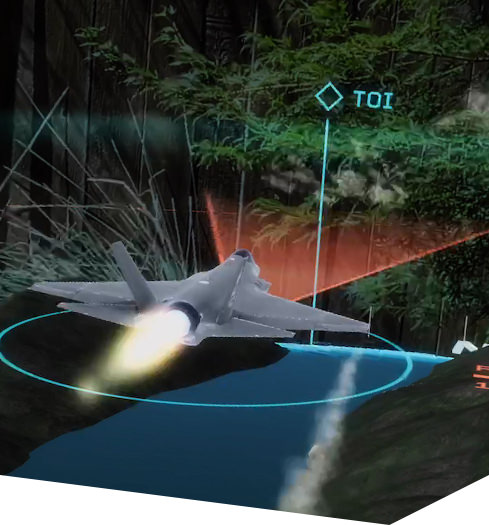 A fully Augmented Reality game that invites solo or co-op players to “Command The Stack,” engaging with three distinct layers of command within the Air Force. 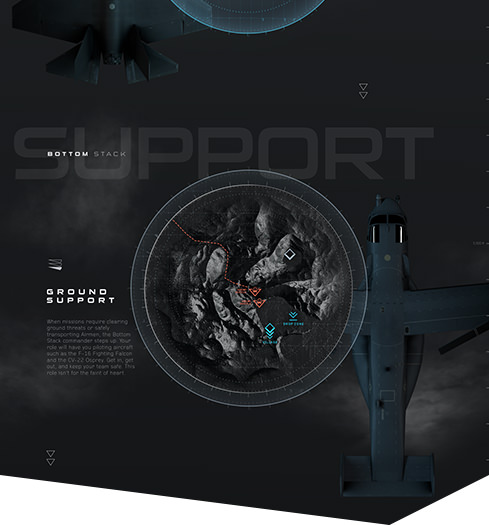 An interactive WebGL website that showcases the AR game experience, invites users to explore the USAF’s aircraft, and offers information about career paths to prospective recruits. 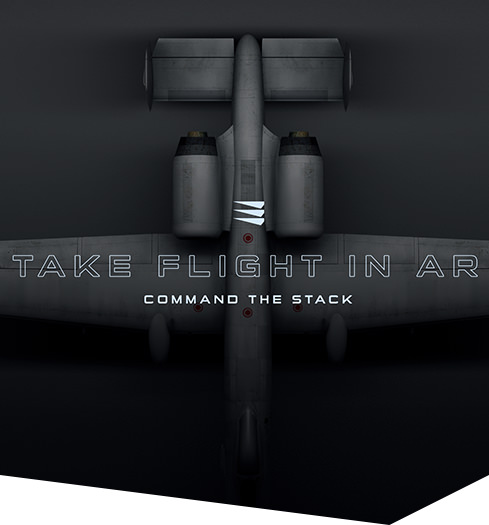 A multi-tiered marketing campaign designed to raise interest in “Command The Stack” in advance of its launch, with emphasis on its unique gameplay and replayability. 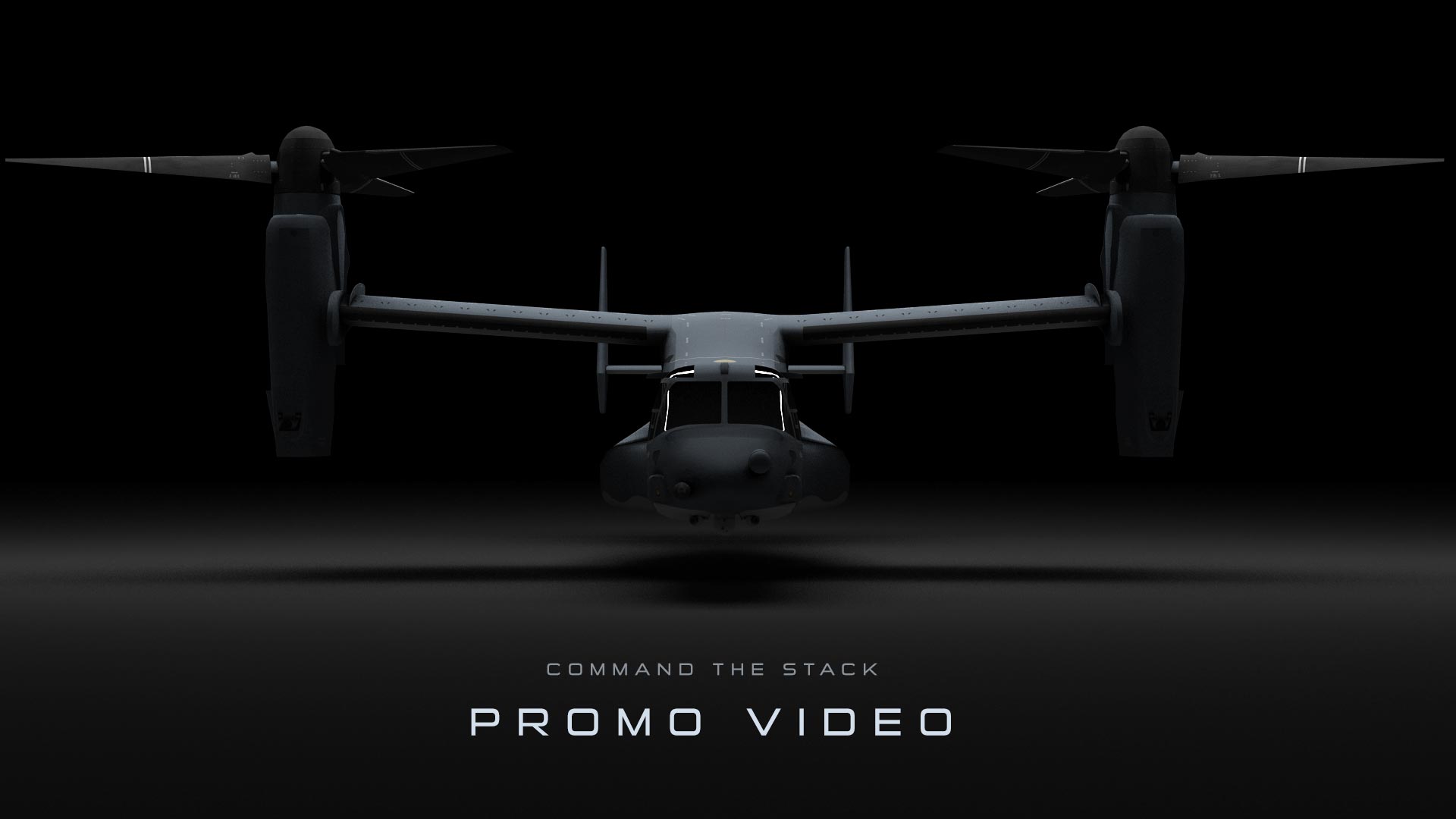 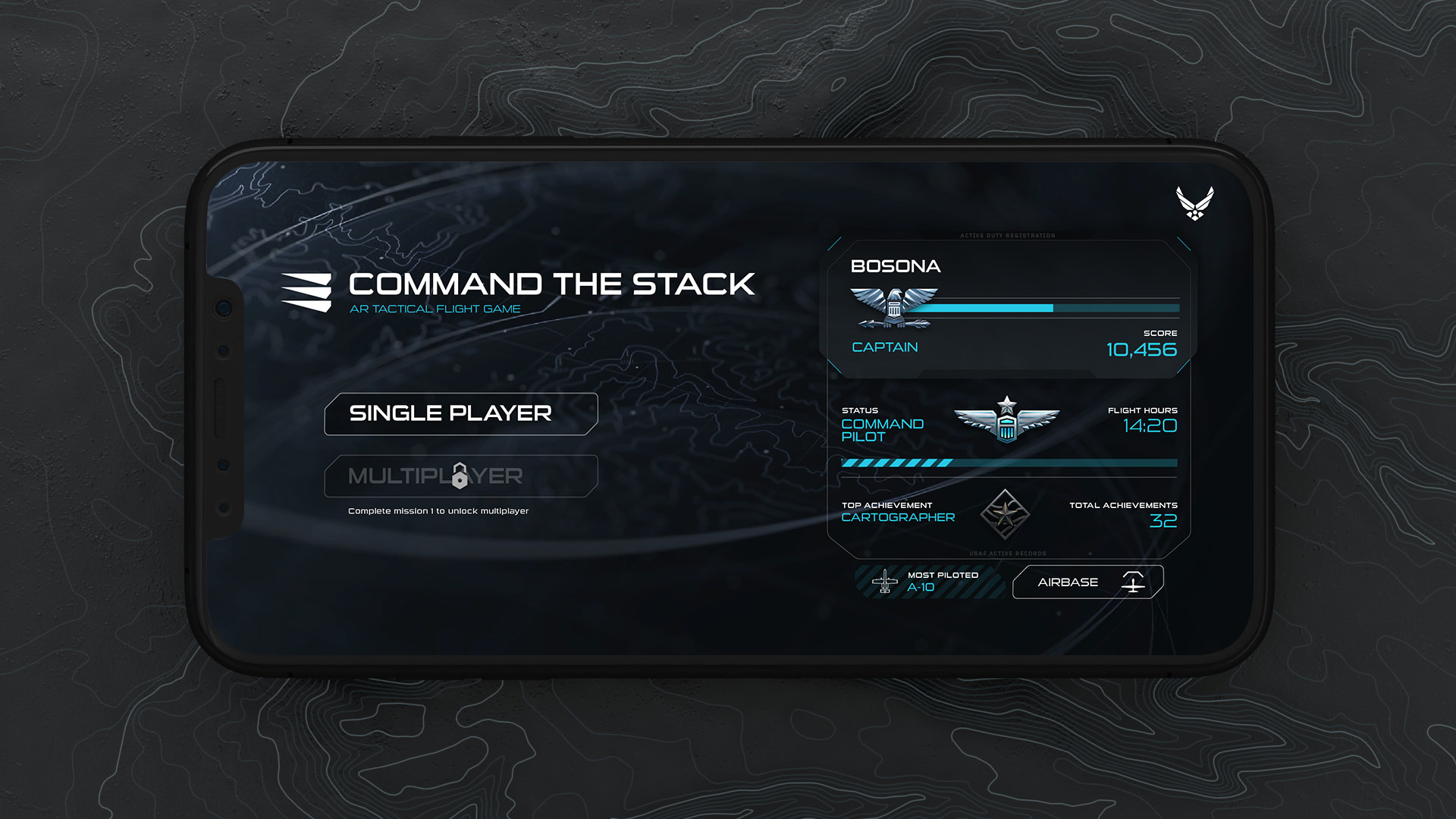 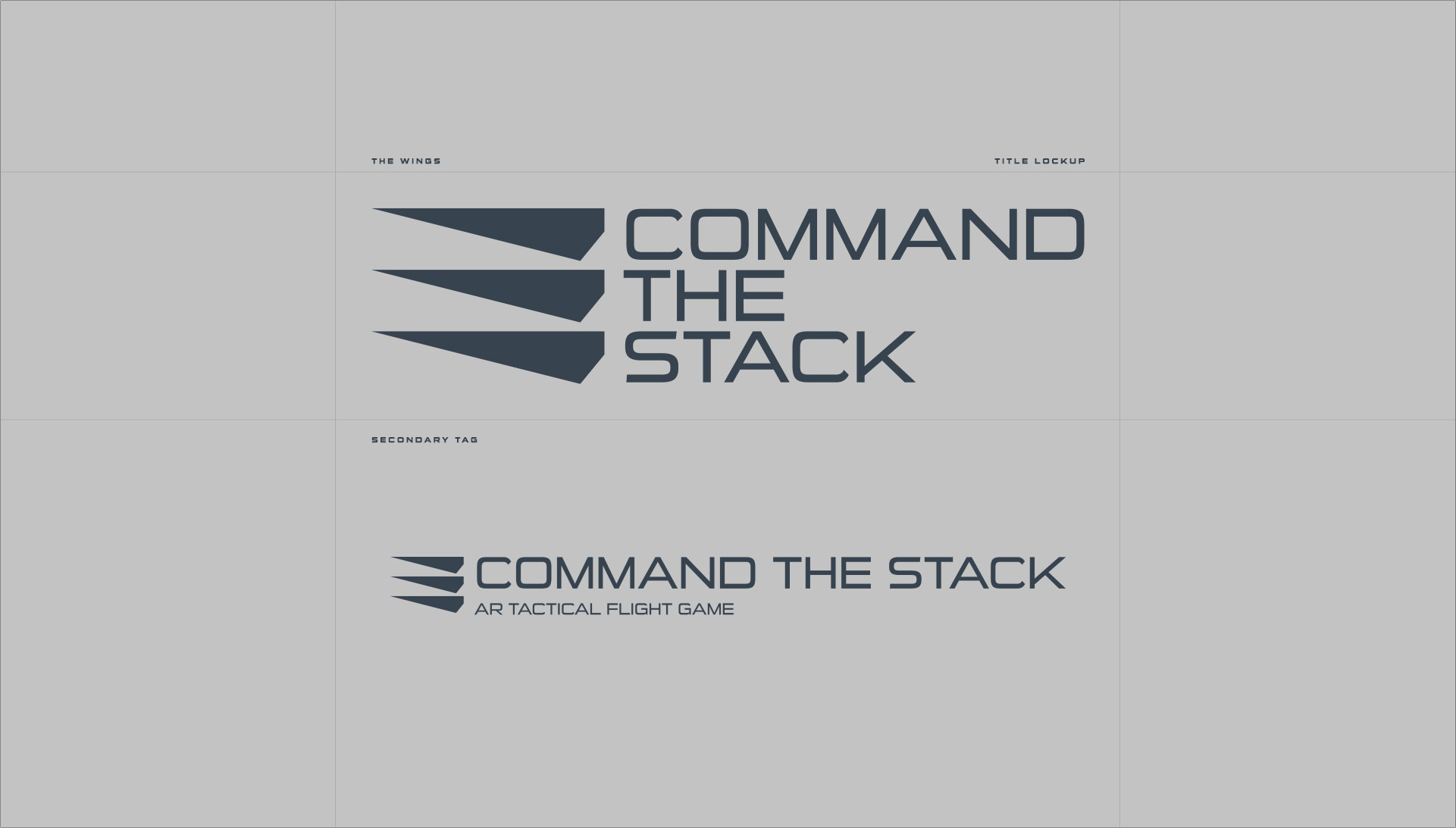 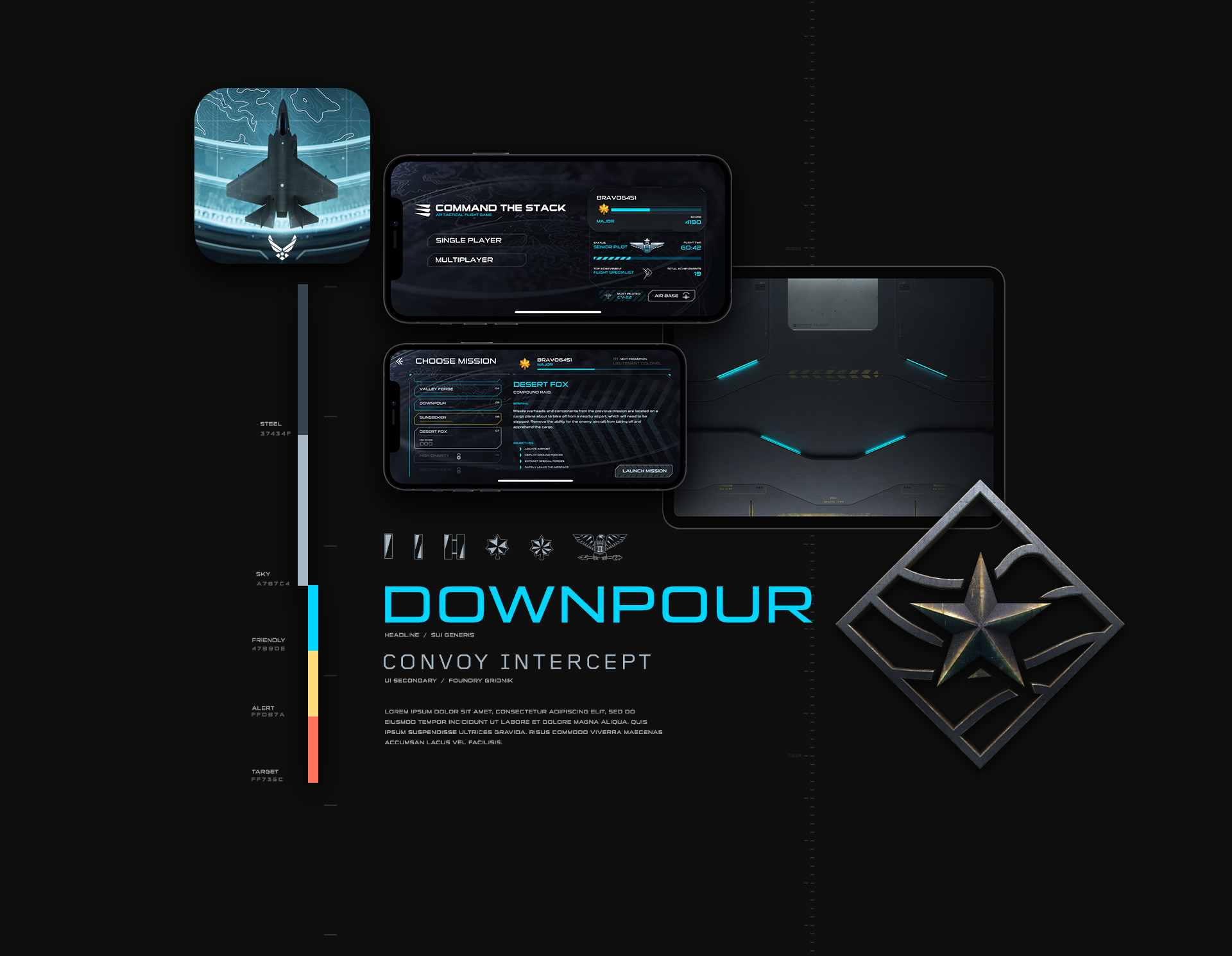 Command The Stack is an AR game played out in your world using your phone or tablet as a window to reveal The Stack’s tactical game board. Think of it as your own holographic command table placed wherever you want to play. Picture the 3D visual projections the Rebel Alliance used to showcase the second Death Star’s design flaw, except the projection is housed within your handheld device. At the beginning of the game, you place the stack and watch it come to life either on your desk or out in a field. You choose the scale and ultimately, how you want to experience the game.

That’s the beauty of AR in this gameplay scenario; you are both playing the game and controlling the camera as you walk around. Dip in close and low for an energetic moment as you take down an enemy fighter or pull back wide when you scan for new targets on the top stack. The play style is solely up to you and completely transforms every time you play.

The Stack is made up of three distinct layers of engagement. The Top Stack, Middle Stack and Bottom Stack. Each layer offers different aircraft and unique strategic objectives. It’s imperative that all three work together to complete a mission effectively and efficiently. This is based on real engagement strategies in the USAF and helps to illustrate, in an interactive way, how engagement works and the importance of teamwork across all disciplines.

To create one game with three different gameplay mechanics was no easy task. The top layer plays like a Real Time Strategy game, where the top-down POV provides support by marking Targets Of Interest for the lower layers, refueling other aircraft, and bombing select targets. The middle layer engages enemy aircraft and plays more like a dogfighting game. The bottom layer, closest to the ground, balances a combination of dogfighting action with transport and ground force insertions/extractions. 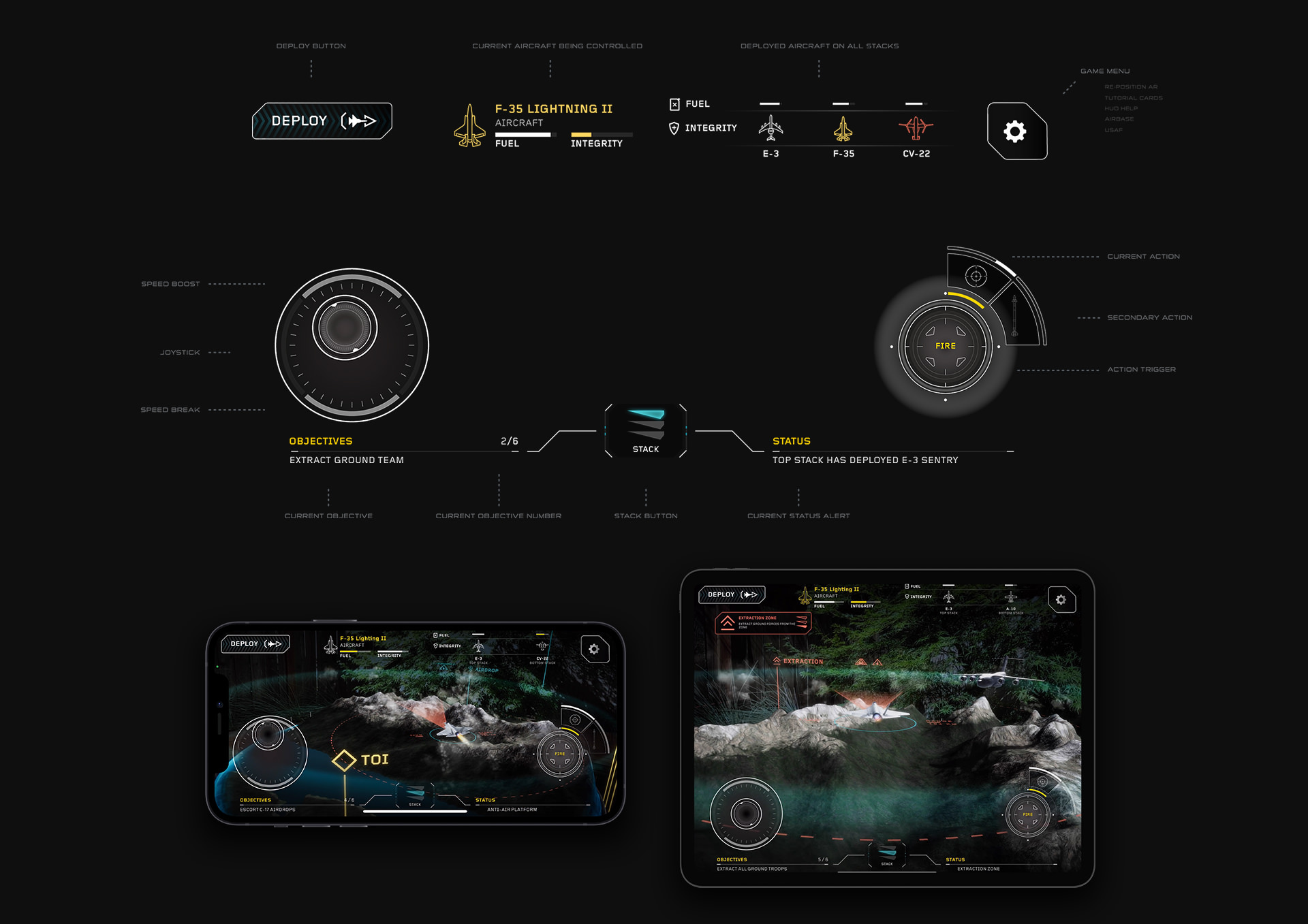 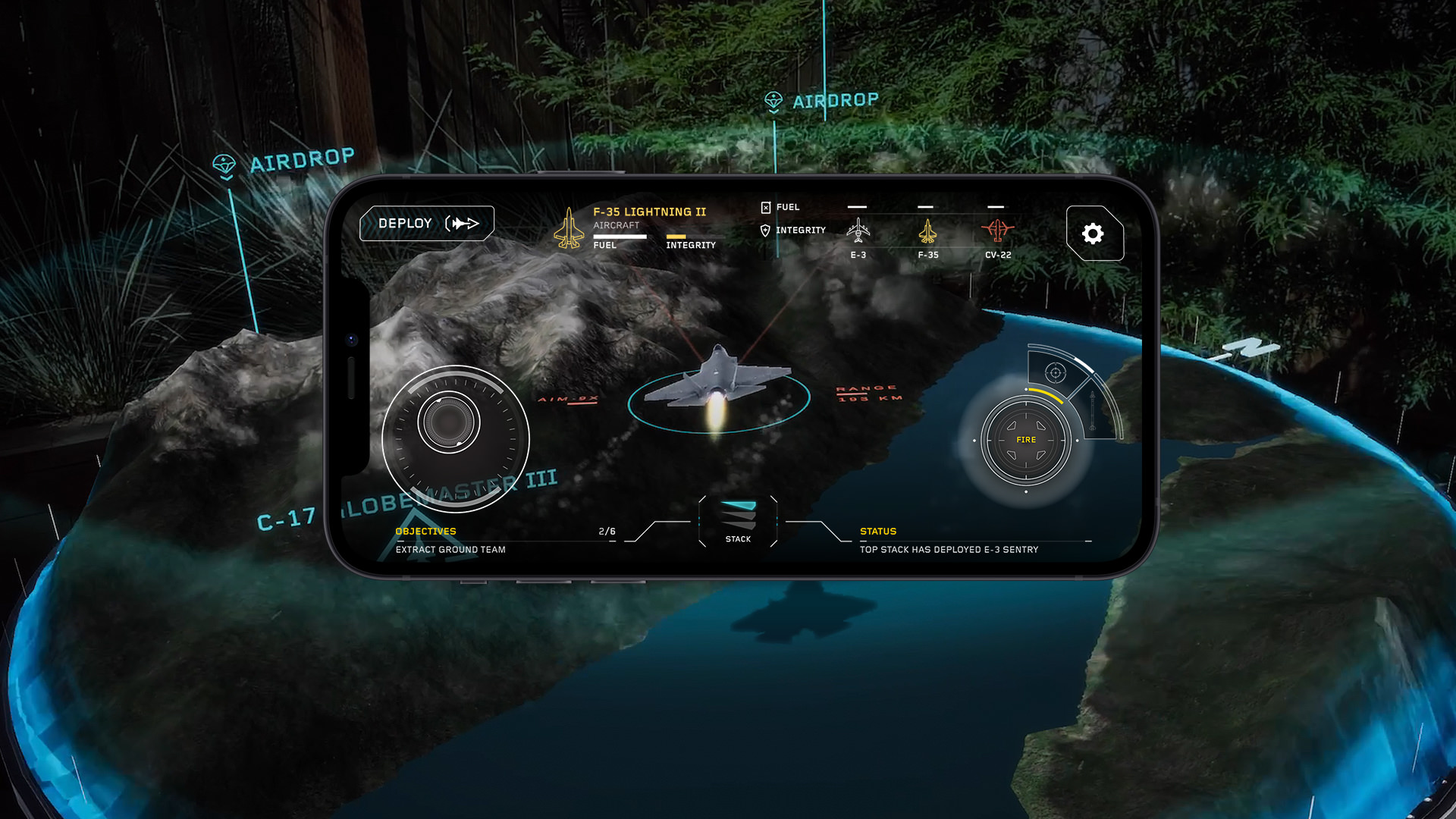 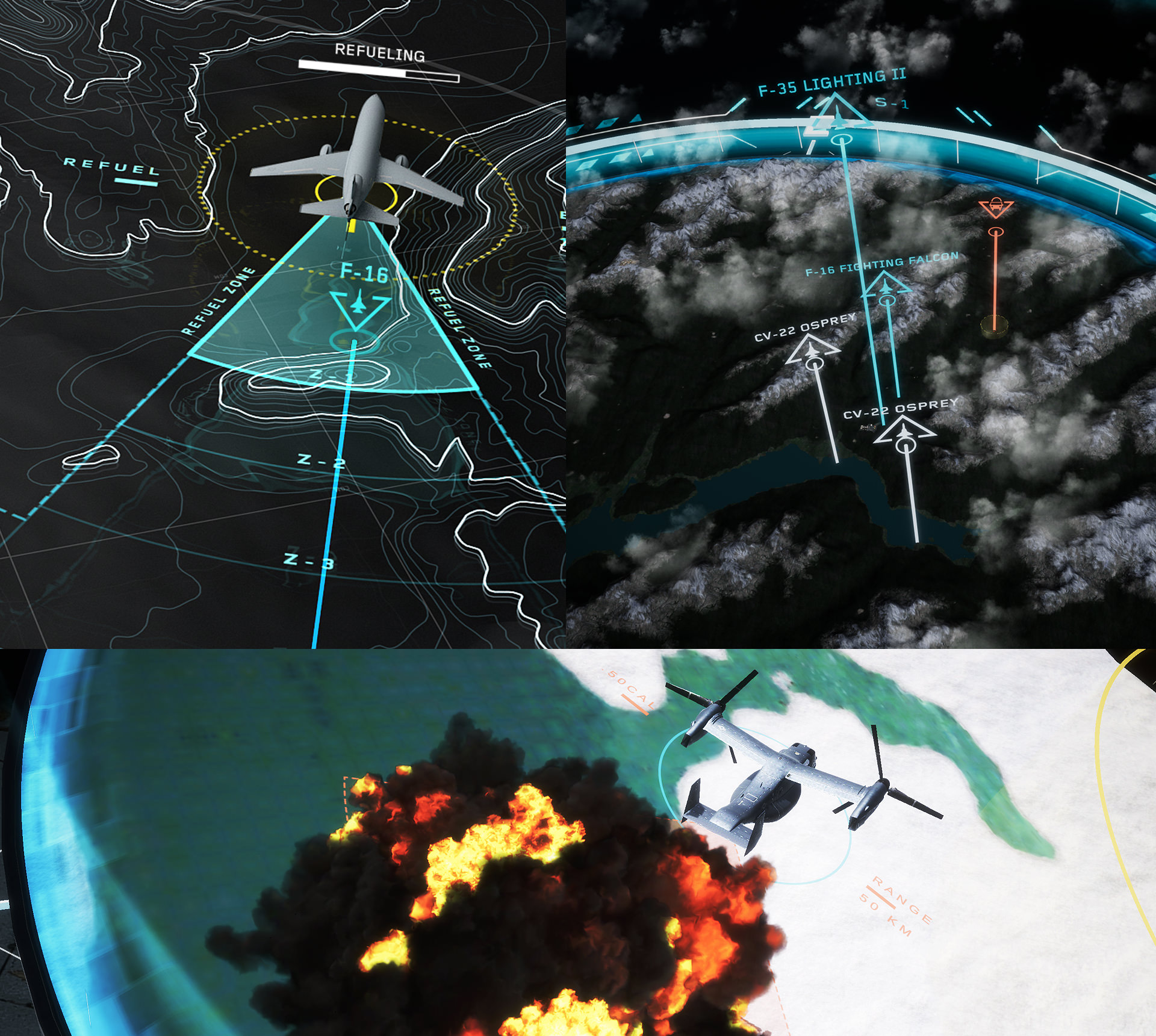 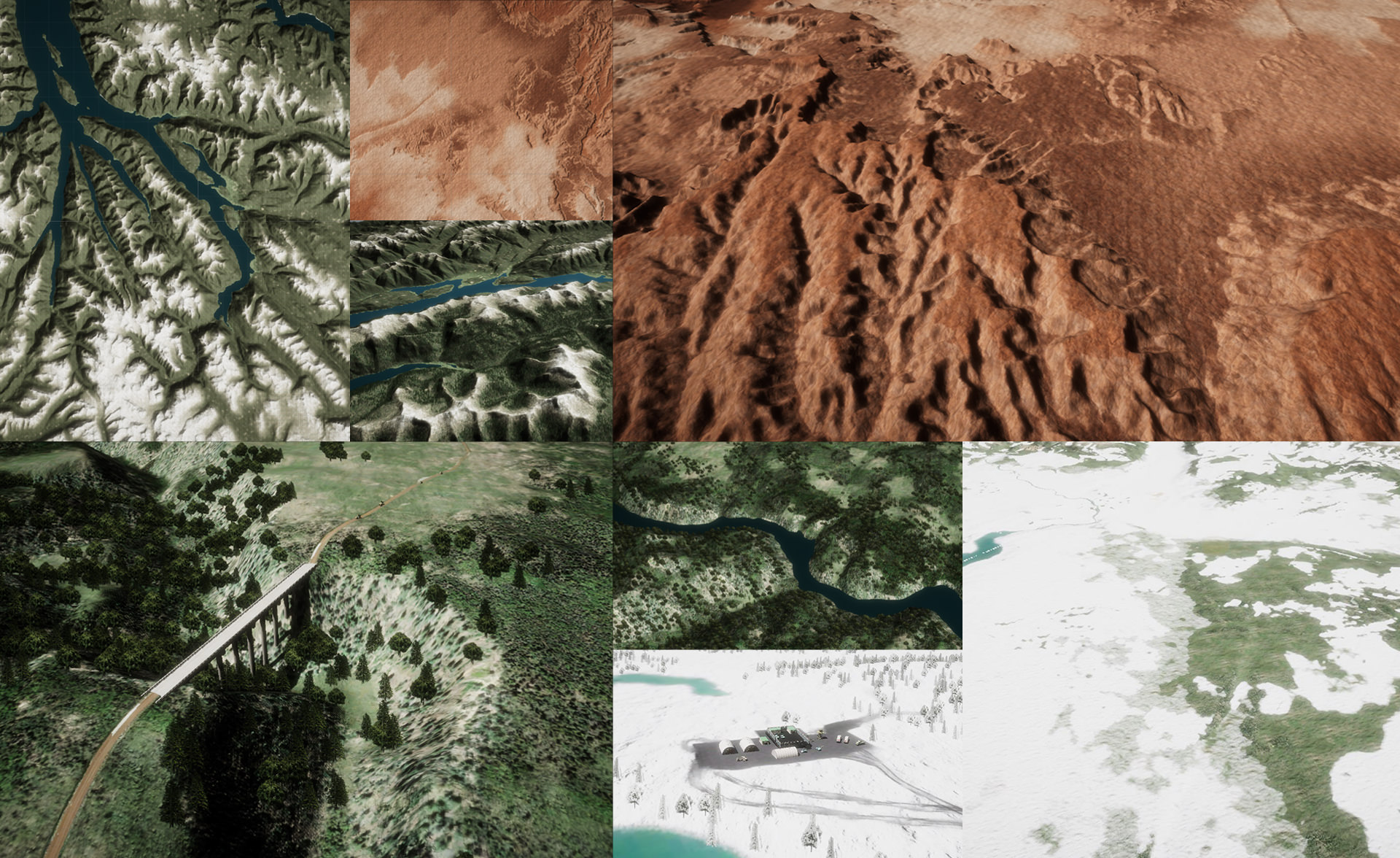 To create the game environments we turned to the USGS, an amazing and free resource that anyone can tap into. Using USGS topological data, Lidar scans, and satellite scans, we created five geographically unique locations in which to develop our levels. We then created a mapping shader that would use various satellite tiles and custom elements to recreate the look of a richly detailed location with just the right fidelity for the game. Balancing this mapping fidelity, aircraft detailing, and gameplay FX with performance on a wide variety of hardware quickly became one of our biggest challenges… then put it all out in your world using AR.

Mission timelines were planned with gantt charts that helped visualize key moments and look for opportunities to utilize different stack layers. The Top Stack is used for radar, mission support, and high altitude bombing. The Middle Stack is for air-to-air combat and ground support. The Bottom Stack takes on the role of ground insertion operations with the CV-22 and ground support with the A-10.

The game narrative was written to help establish an engaging approach to the missions that would develop as players gradually revealed the story. In this fictitious setting, a local militant organization has been gaining resources and power and is beginning to force their influence in the area. The USAF is asked by coalition forces to help ascertain tactical whereabouts, gather intel, and launch strategic deterrent missions as needed. As the first few missions are completed, the story grows to reveal that this militant group is much larger than first thought, and it will take all of the USAF’s capabilities to neutralize threats while aiding the local populations impacted by the insurgents. 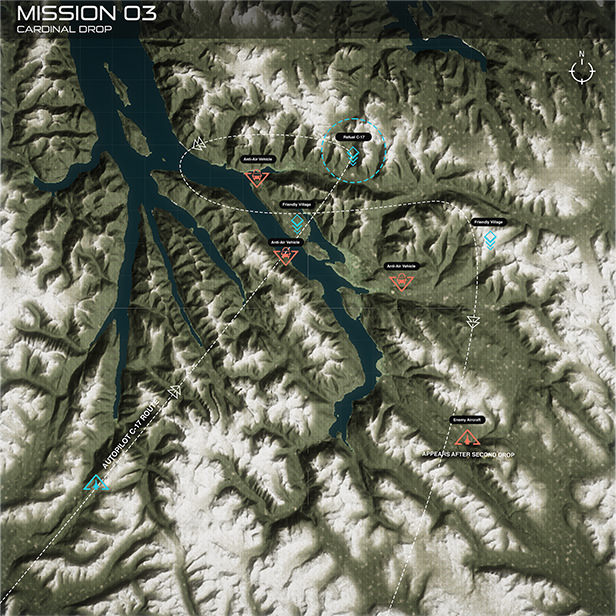 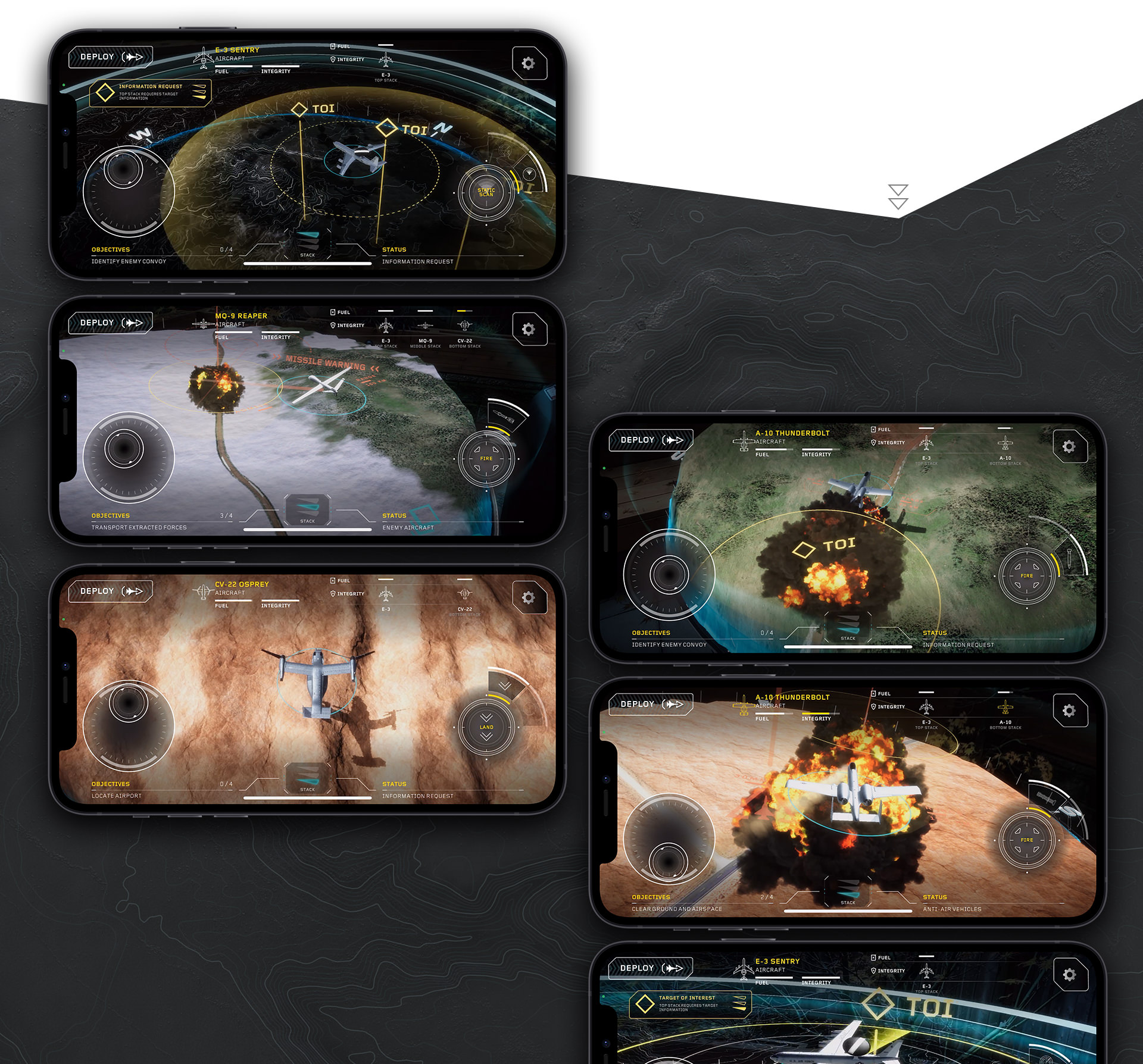 Not satisfied with just a single player experience, we created a multiplayer co-op mode that lets you join up with players online. Once you get through mission 1 and prove your gameplay competence, multiplayer opens up in the form of quick matchmaking games or hosted private games.

Gameplay is the same for multiplayer, but you’ll be in charge of a single stack layer and will be reliant on your fellow players to do their jobs in their respective layers. This is the moment where teamwork really becomes critical. If your friends are running out of fuel on the lower stacks and you’re not paying attention on the top, the mission might just fail because of you. Pay attention, Airman, and get that KC-10 airborne! 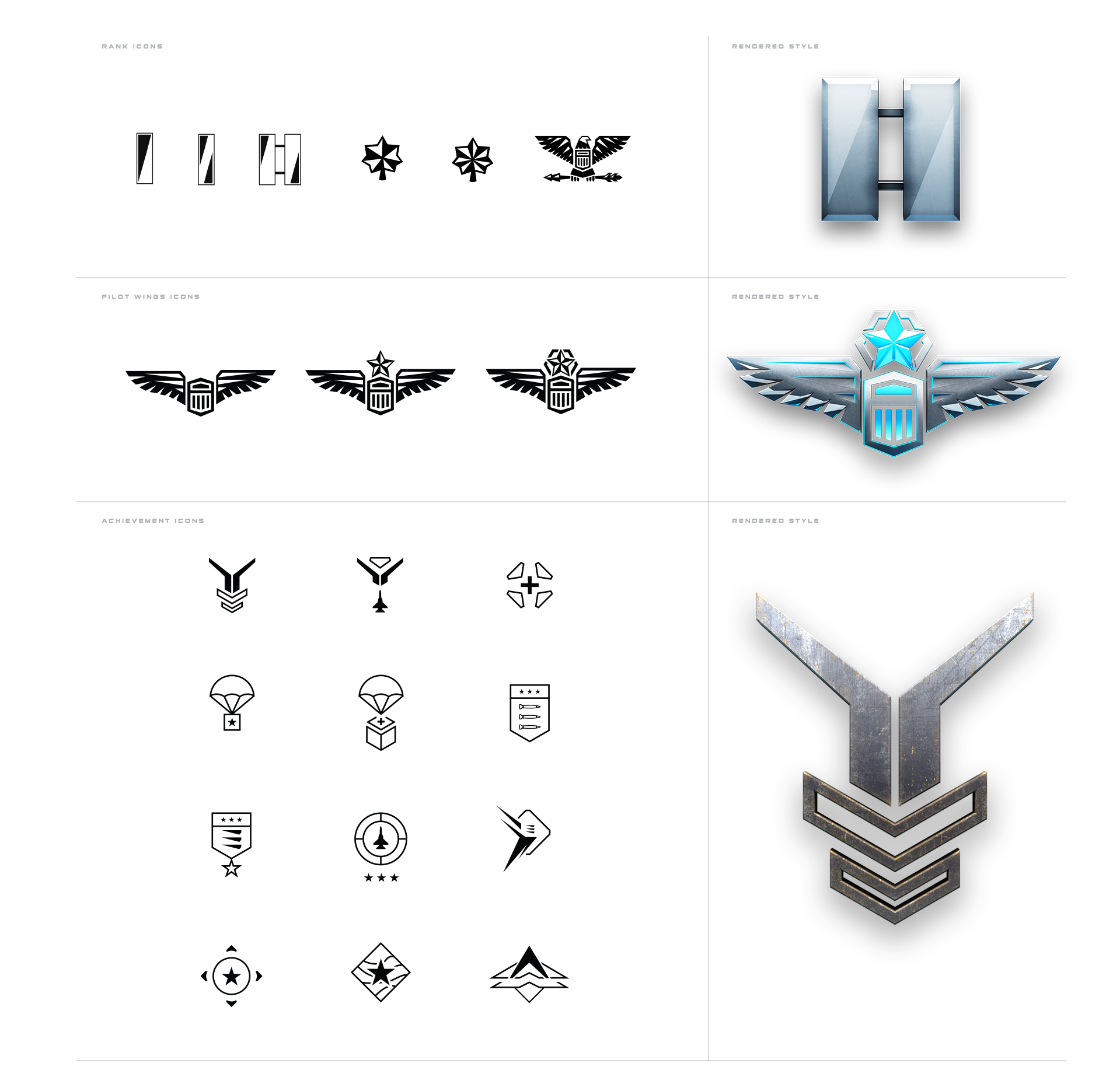 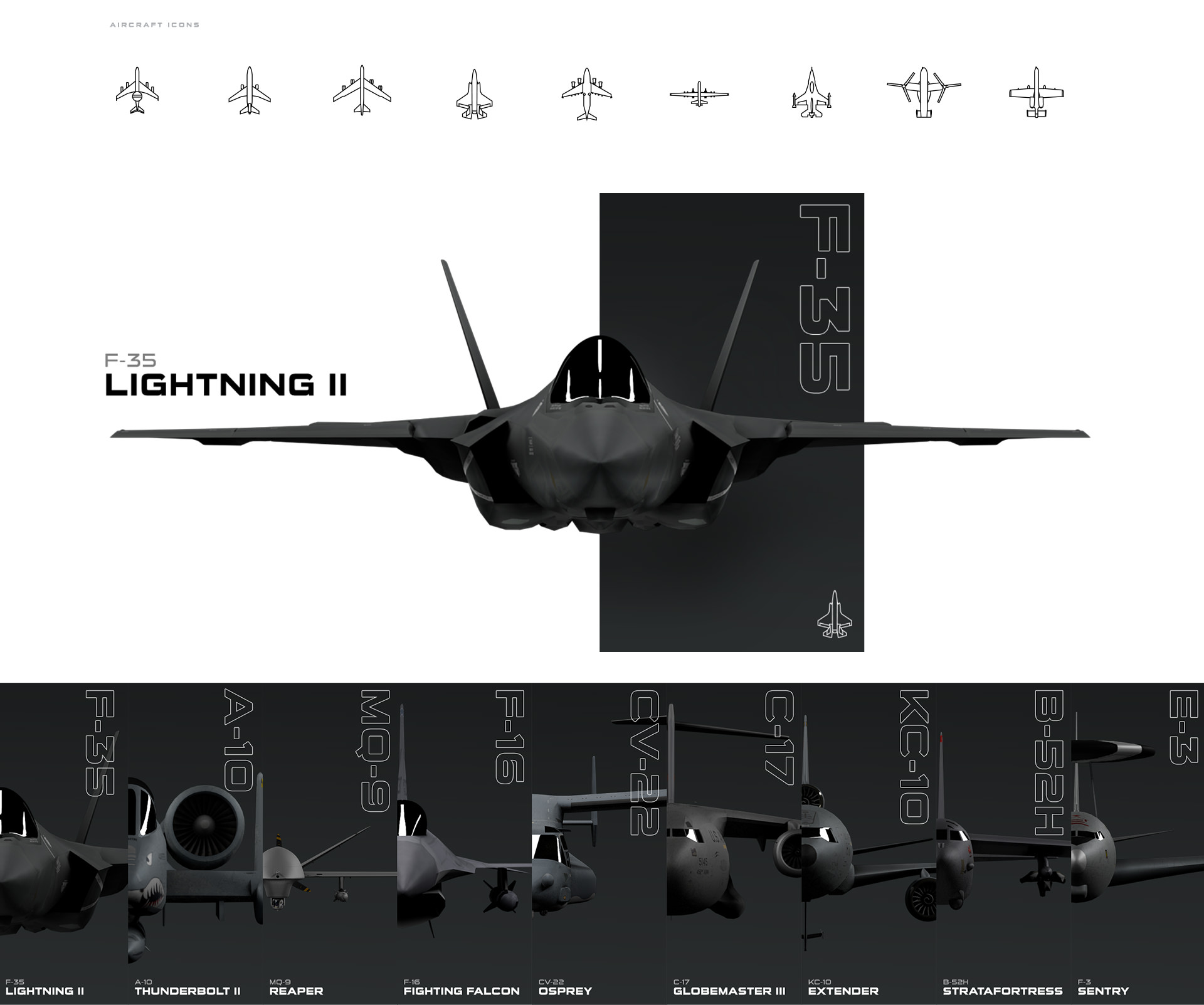 The amount of time we spent crafting every minute detail of the game experience would give Tony Stark a run for his money. From the placement of frequently used buttons in the UI to the overall technical line language of the GUI, every pixel was deeply considered. A whole suite of icons was created to handle everything from rank to weapons. Many of these elements were also created as 3D assets for in-game rendering where needed. But no detail was more important than the aircraft. We pored over every detail of these iconic machines — even those minute details you can only see from specific angles.

The authenticity of the aircraft was paramount, and beyond their visual accuracy, we wanted to reflect their flight signatures in a meaningful way. The game is certainly meant to play like an arcade game, so flying the aircraft has been simplified to make the experience fun and approachable. However, we used real world attributes such as relative speed, afterburners and turning radius to develop each aircraft’s flight mechanics. 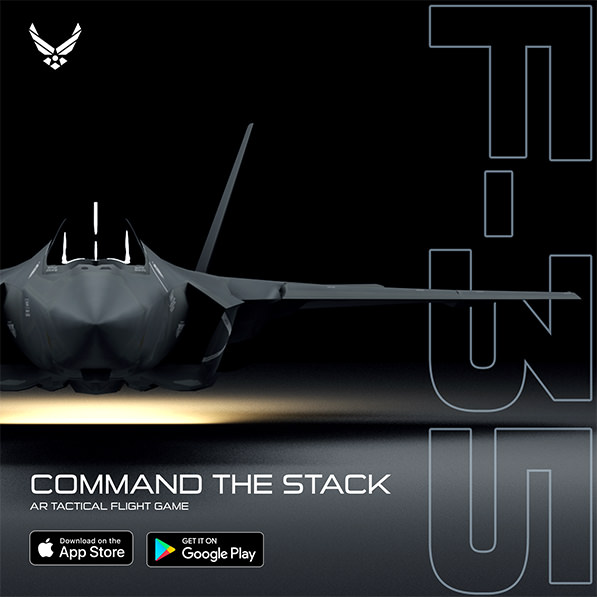 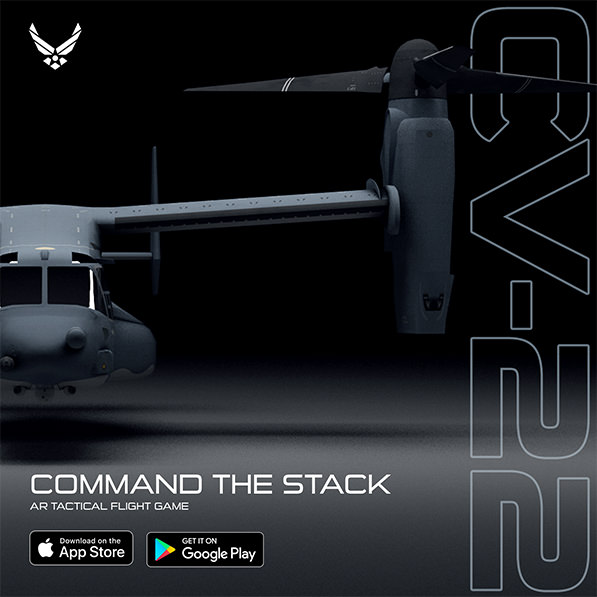 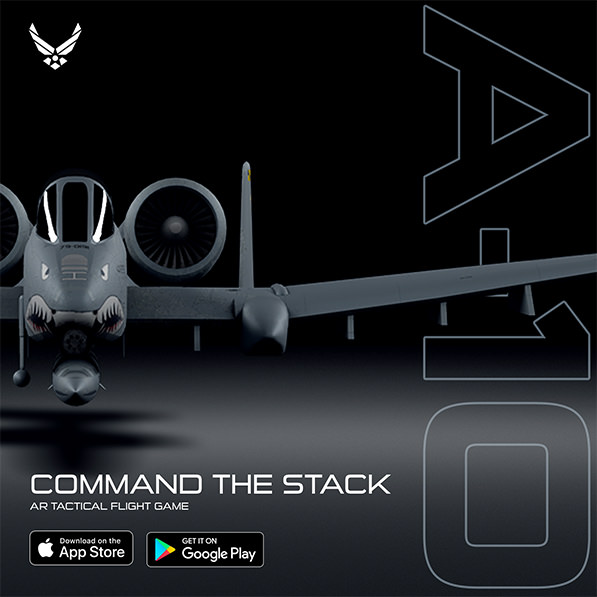 As the game wrapped, we created a wealth of additional designs to assist GSD&M in their development of a marketing campaign that would highlight Command The Stack in a unique way for the USAF. We created assets to help support GSD&M’s campaign that featured aspects from the game, like the aircrafts, which were stripped down from a graphic perspective since their look is so iconic and striking. We also used The Stack itself to showcase the game’s unique setup. Marketing assets ran the gamut from social motion posters to an interactive WebGL marketing site with real-time multiplayer leaderboard.

As the language came to life, we embraced a more editorial aesthetic mixed with dramatic perspectives on the content of the game. Fans of the USAF aircraft can find the beauty in the game’s details and those who want to play a unique AR multiplayer game can see just how layered the game truly is. 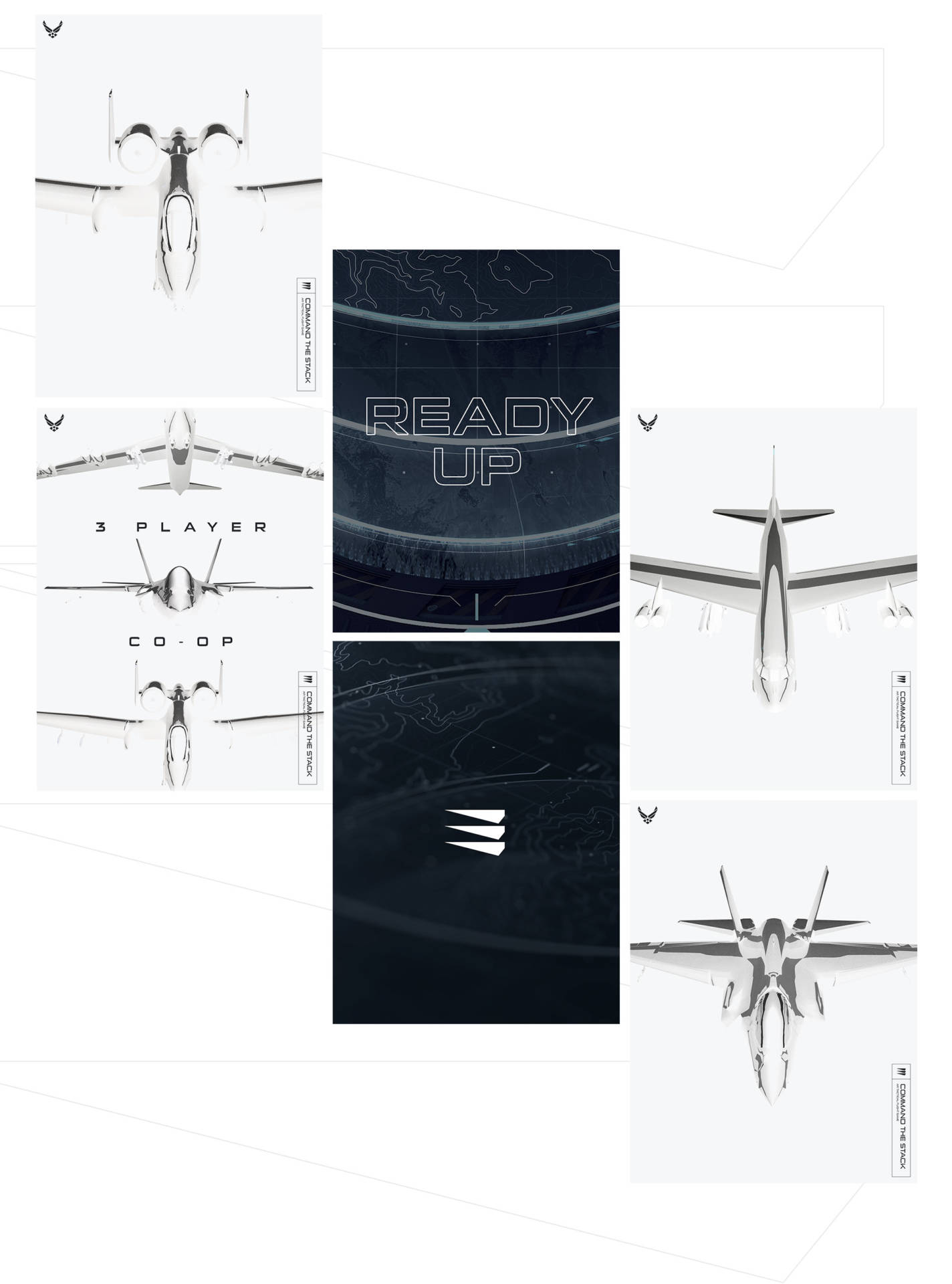 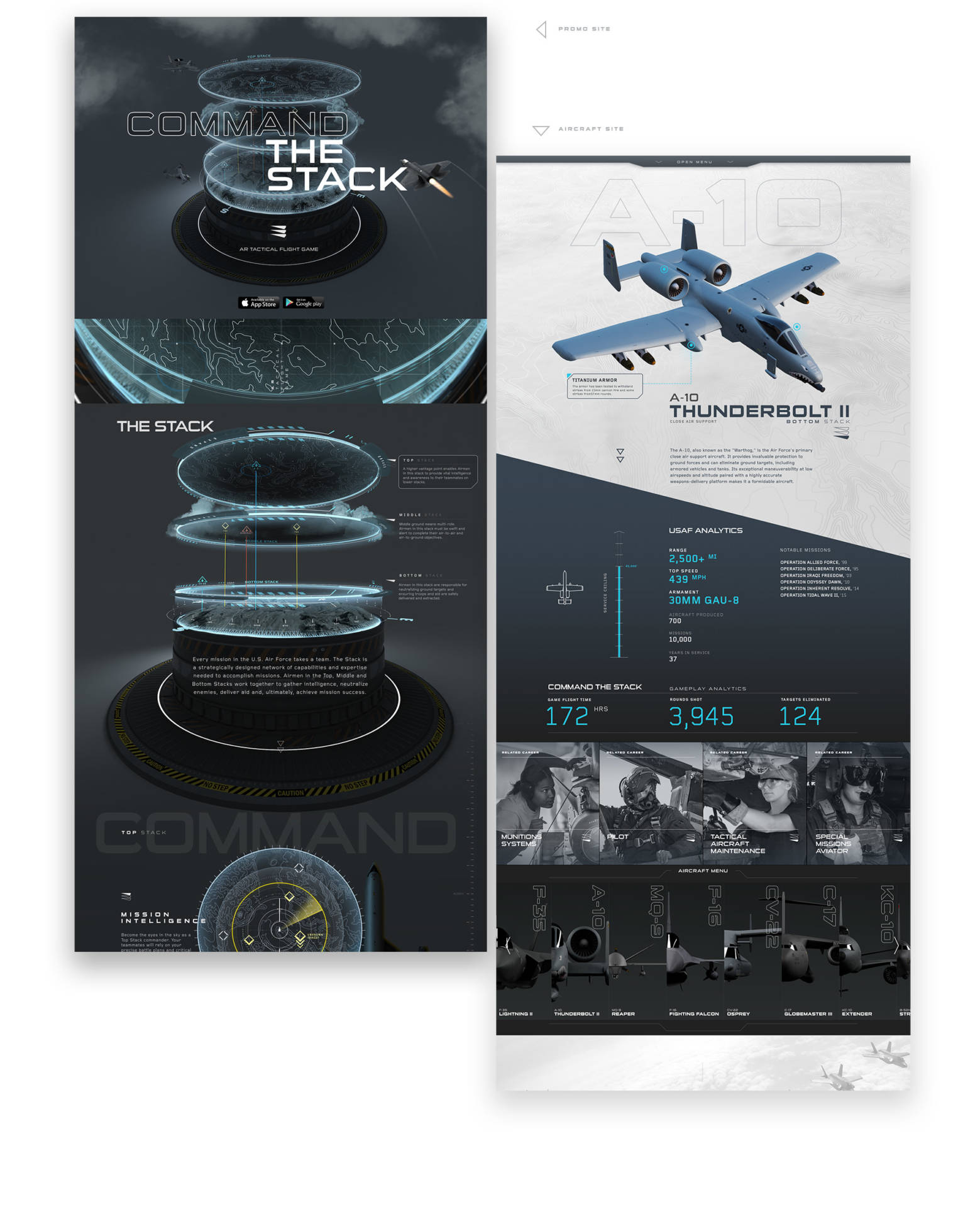 We’ve helped create an entirely new approach to AR gaming that reveals the exciting possibilities that are available to us. The USAF was the perfect client to embrace this future-leaning project and GSD&M, the perfect partner to help make it happen.

The Air Force is on the cutting edge of defense technology, and Command The Stack reinforces its leadership as a technological innovator in the consumer entertainment category as well. So grab a phone, tablet, Apple or Android and join us online! We’ve got some Stacks to Command.